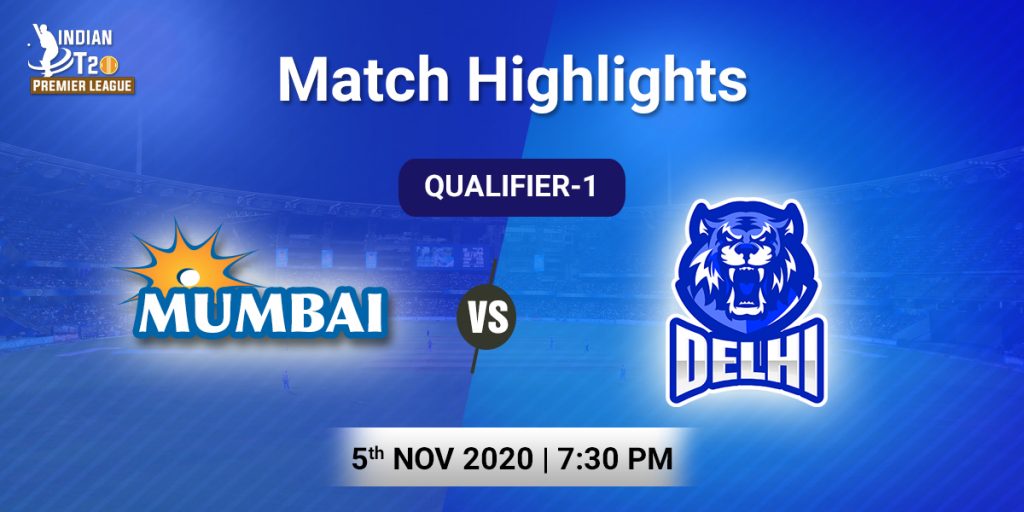 Welcome to the Highlights of the Mumbai vs Delhi 1st Qualifier of Indian T20 Premier League 2020.

Mumbai becomes the first team to qualify as the finalist

Mumbai showing his power in the first qualifier set up a big target of 201 runs against Delhi, the team defeated Delhi by 57 runs.

Toss: Delhi Capitals won the toss and opt to bowl

Mumbai has been one of the most consistent teams and powerful team in the Indian T20 Premier League. Mumbai has depth in the batting order & also has a ruthless bowling attack.

Rohit Sharma failed to get a single run on his account. Ashwin mange to pick the wicket very first ball. SKY (Suryakumar Yadav) come on the crease after departing Mumbai captains in the very first ball. Both looking very confident on the crease and played some good shots, and remove pressure as well. A crucial partnership of 78 between SKY (Suryakumar Yadav) and QDK (Quinton De Kock), and after that, Ashwin once again strike with the ball and get Quinton De Kock wicket, Mumbai didn’t stop at any place continuing his attacking intent. and Much needed Knock played by SKY(Suryakmar Yadav) as well as Ishan Kishan, both score half Century 51 off 38 & 55 off 30 balls, respectively.

Mumbai managed to get a big total of 200 on the scoreboard. Hardik Pandey smoked 37 runs in just 14 balls with the help of five sixes. Delhi looking hopeless against Mumbai, Delhi striker bowler didn’t pick a wicket, Ashwin Mange to get 3 wickets just conceding 29 runs in his four overs spell.

Delhi Come to chase a big target against the best bowling attack and lost his two wickets in the first over. Bumrah comes on the attack and picked a wicket on his second ball of the over, lost 3 wickets in two overs without scoring a single run on the board, becoming the first-ever team in the Indian T20 Premier League history to lose 3 wickets at a total of 0 runs. Delhi captain tries to get settle down but nothing good for Delhi, once again Bumrah comes to bowl 4th overs and picked up Delhi’s Captain wicket. Risabh Pant continuing his inconsistent form and get out, just scored three runs in nine balls. A small Partnership between Stoinis & Axar of 71 runs, unfortunately, couldn’t help them win the game.

Jasprit Bumrah picked 4-wickets while Trent Boult managed to get 2, building pressure on Delhi and laying the foundations of Mumbai’s massive victory. Mumbai manages to get a comfortable win in the first qualifier. On the other hand, team Delhi will proceed to Qualifier 2, to be played on November 8, to compete against the Winner of Eliminator 1.