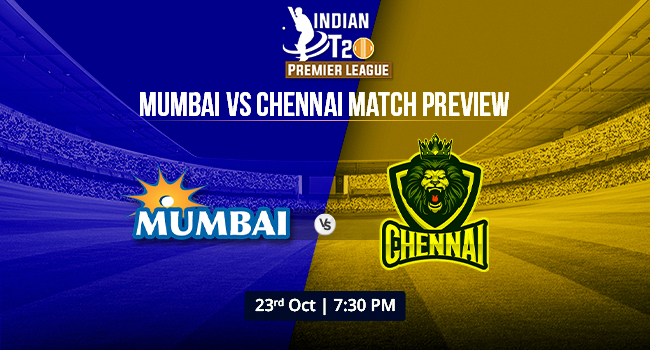 Indian T20 Premier League’s biggest rivalry is back as Team Mumbai take on Team Chennai in Sharjah on Friday. They will meet again after 40 matches. This will be Mumbai’s first game after their twin Super Overs-thriller against Punjab. While the Rohit Sharma-led unit came second in that game, they have won six games out of nine and are in the top half of the points table.

Chennai too is coming into this game on the back of a loss against Rajasthan. But unlike Mumbai, they are currently on the eighth spot in the points table, having a win-loss ratio of 3-7.

Chennai defeated Mumbai in the first match on September 19 at Abu Dhabi. Since then, it has been a downward spiral for the three-time champions. Mumbai, on the other hand, recovered in grand style to win five consecutive games and although they have lost three games, two of those matches were a result of a Super Over against Bangalore and a ‘double’ Super Over against Punjab.

Team Chennai’s star all-rounder Dwayne Bravo is out due to injury. In the last match, Chennai had used 6 bowlers but Chennai lost the match, the win against Hyderabad definitely increased Chennai’s confidence but after that, the team lost the match again against Delhi and Rajasthan. Sam Karen, Shardul Thakur, Deepak Chahar have impressed in bowling, spinners like Ravindra Jadeja, Piyush Chawla, and Karn Sharma strengthen the Chennai spin attack.

Rs. 1 Lakh In Winning On PrimeCaptain