Introduction to Prime Captain, the best fantasy app in India.

Prime Captain is a leading fantasy sports application in India. Which covers all most top 4 best sports like, Cricket, Football, Basketball, and Baseball.

Right from the day of inception of the Prime Captain fantasy game application, our only focus is to keep our users happy, we try our very best to give our users a different experience with an opportunity to show their sports skills on our fantasy sports app and parallelly also give them a platform where they can walk the path which leads to their dream. We always work on how we can improve the app and how better we can serve the people. So, for that, we always organize some exciting offers to engage our user base.

Notably. Prime Captain app is Developed and owned by the reputed IT company of Pune. This company has more than 10 years of experience in the gaming sector. They have top-notch expertise in the game development sector.

We have planned literally great for this Indian T20 league season 2021, but we all know India is going through really a tough situation and that’s why BCCI canceled all T20 Matches so, we have also suspended our prime offers with the season. But, for our daily user base, we are always come up with amazing and awesome offers like we have started telegram giveaways and confirm mega contests for our daily players.

We also planning to Launch something big for our users and we are working on it. Till that, please enjoy these offers and stay connected with us for longer-term. 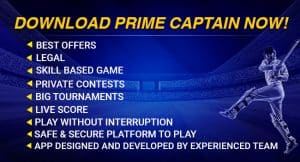 Here, you can see all active best offers..!

Apart from the experience, Prime Captain gives you a safe, secure, and reliable UI/UX to play flawlessly with your friends or teammates. This includes protecting the player’s data from getting hacked to secure all user’s information we cover all the areas of security here.

The Prime Captain claims it has adopted a strong and comprehensive security program and information security policies that consist of technical, managerial, operational, and physical security control measures.

Many people think fantasy sports is having something illicit activities but the truth is, Prime Captain strictly follows the laws of India, which clearly states that games that require the player to apply skill are considered legal. Just the noticeable part is, the government banned some states of India from playing fantasy sports app and the states are like Assam, Odisha, Andhra Pradesh, Telangana, Sikkim, Nagaland can only participate in the practice contests as of now.

So, the users from these states can only play our practice contests which are available in our play store version of the Application. We have mentioned all these things on our website as well as in the Prime Captain fantasy sports mobile application.

Playing on Fantasy Sports Application is a Skill

When we speak about the game, behind that there are always some skills which we have to put. Prime Captain fantasy sports application is also the same game where we have to make a team of best players and on the basis of the points system, we will get a point. The contestant who will get more points will win the game. That’s It. These are the skills overall we have put to play fantasy cricket.

Therefore, it is not a game of chance and you definitely need to have some cricket knowledge to play fantasy cricket.

Our Indian cricket association always organizes so many tournaments and we are really happy for the people of India that they always show a distinct amount of enthusiasm to watch the tournaments. As we have a fantasy sports app, we also come up with every tournament that people can enjoy by playing with real players.

so, players can test their cricket expertise at any time and enhance their knowledge about cricketers and their performances.

As we have mentioned this game is all about skills, for that we need practice. So, as far as user concern we have built an application with some private contests. So, any newcomer or a new person who wants to play fantasy cricket can play first our private contest to know the rules and get familiar with the UI then, you can play real games on our official app.

As there are some states are banned so, for them this feature is really helpful and enjoyable. To play fantasy sports on Prime Captain you have to log in or sign – in with some credentials and then you can start playing.

Prime Captain also Provides a Live Score Board for Players. We always say we think through user perspective and that’s why we have put the Live Score Board in Our Prime Captain Fantasy App. Users can click on the tab of the live scoreboard and they will able to see the match scorecard there. This is for our users I.e., one platform, and many more uses.

Play without Interruption on the Prime Captain fantasy app

You have seen many applications having some popups and ads are there. So, users can get disturbed while playing games. So, for that concern, we don’t have such feature of popups and ads that user gets bored by seeing such disturbances. So, users will get flawless playing console to play fantasy cricket on Prime Captain.

“There are no Interruptions, there is always entertainment.”

Prime Captain is an independent organization and is not affiliated with any sports bodies or teams. Prime Captain is completely legal wherever it is offered. Residents of the states of Andhra Pradesh, Assam, Orissa, Telangana, Tamil Nadu, Sikkim & Nagaland are not allowed to play Fantasy Sports by law. 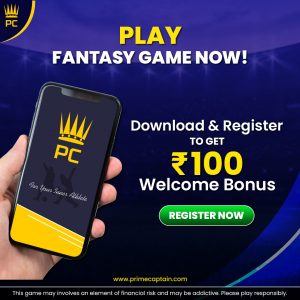