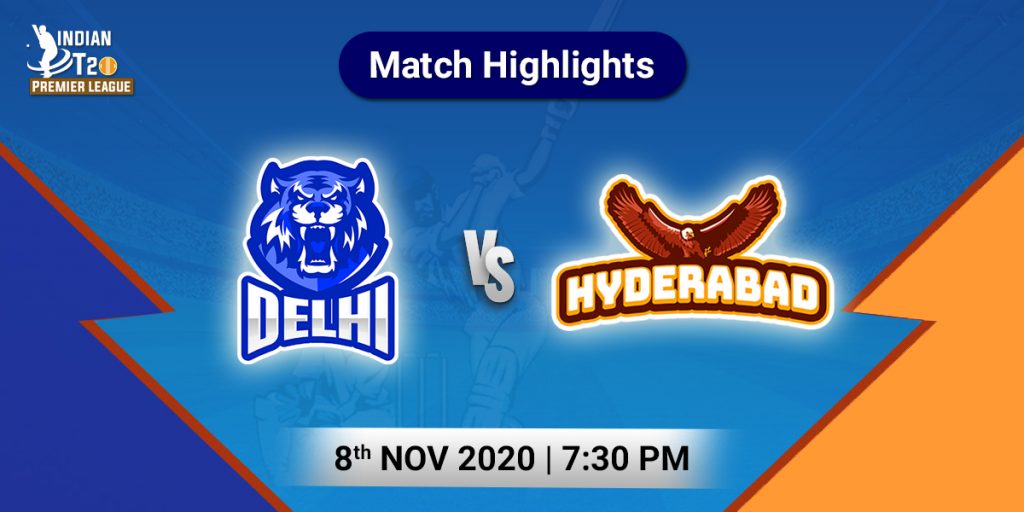 Welcome to the Highlights of the Delhi vs Hyderabad 2nd Qualifier of Indian T20 Premier League 2020.

Delhi becomes the 2nd team to qualify as the finalist

Delhi wins the last match by 17 runs against Hyderabad and makes his name in finalist. Team Delhi again ready to clash with Mumbai in the final of the Indian T20 Premier League 2020.

After winning the toss, Delhi’s Captain Iyer Opted to bat first. Iyer comes with full planning for this match. Marcus Stoinis comes to open the Inning for 1st time in this Indian T20 premier league for his team, on behalf of Ricky Pointing statement in Press Conference. Stoinis proved himself as an opener, played a stunning knock of 38 off 27 balls, and also provide a good start for his team. Delhi loses 1st wicket off 86. Rashid Khan again did his work for his team to provide an important breakthrough for his team.

On another side, Shikhar doing his job again for his team, and this inning gift for Delhi in qualifier 2. Dhawan played a brilliant knock score 78 off just 50 balls, after getting out Delhi’s Captain Iyer, Heitmeyer comes on the crease and make a good partnership with Dhawan off 52 runs. Dhawan gets LBW out on the ball of Sandeep Sharma in the 19th over. Hetmyer also played an anchor role at the end of the inning score 42 in just 22 balls. Delhi finished his inning with a good total of 189 on the board.

2nd Half of the Match: Delhi vs Hyderabad

Hyderabad also did his experiment with opening pair, Priyam Garm comes to open the inning with David Warner, Ruthless Rabada has done his work in very 1st over, picked warner wicket on his 1st ball of the over. Hyderabad gets a big blow after losing 1st wicket in form of Captain. Manish Pandey comes on the crease and builds a small partnership between Garg and Manish Pandey. Iyer calls Stoinis to the bowl, and again Stoinis don’t upset his Captain and picked two wickets in the same over.

The final hope for Hydrabad two new batsmen on the crease, Kane Williamson and Jason Holder try to build a partnership again after a small partnership of 48 runs Holder dismissed by Axar Patel in the 12th over.

Stoinis again come on the attack and take a big wicket of Williamson. Required run rate going higher gradually then come to Abdul Samad and hit some useful shots, Ruthless Raba comes on the attack and picked up three wickets in one over.

Once again Delhi bowling unit proves himself pacers get seven wickets out off eight-wicket one wicket goes to Axar Patel.