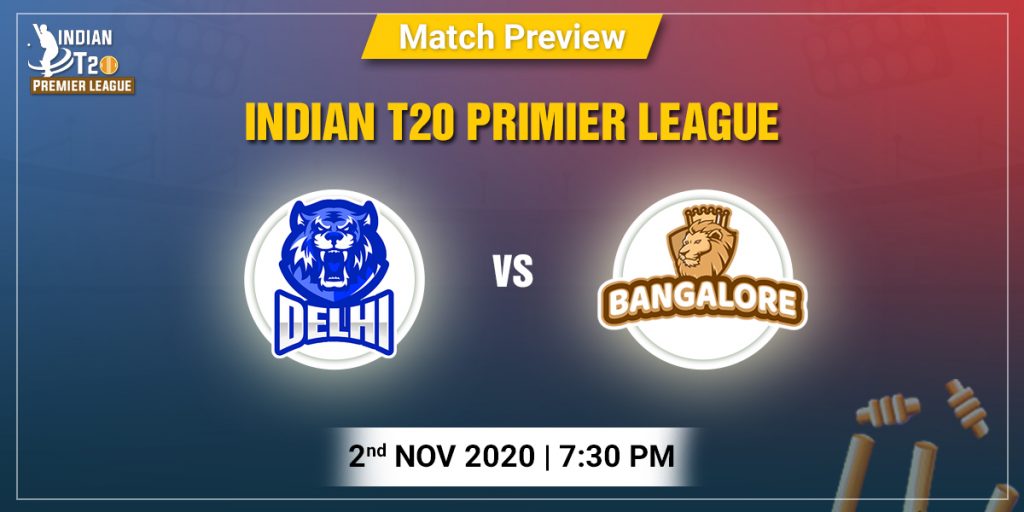 Welcome to the preview of Delhi vs Bangalore 55th Match of Indian T20 Premier League 2020.

Another clash between Delhi and Bangalore, this battel for Qualifier 2, Mumbai already qualified in this tournament, this battel can decide who will become the next qualifier team & Loser could bow out of the tournament. Both teams are in the top four but the team played inconsistent cricket at the back of the league stage, Delhi lost four matches in the last five matches and Bangalore lost three matches in the last five matches.

Delhi had won seven of its first nine matches and Bangalore seven of 10. Sealing a top-four spot seemed only a matter of time. But since then, they have been winless in four and three matches respectively, leading to the current tightrope walk.

Bangalore had won seven matches with NRR of  -0.145 & 14 points. The middle-order is the biggest concern in Bangalore, Moeen Ali is the best option to give balance to his team, Shivam Dubey is another best option to come back in playing in place of Gurkeerat Singh Mann.

Bangalore now play Delhi. If they win they qualify as the No.2 team after Mumbai.

The pitch getting dryer day by day and dew is the main factor in the second inning. Both teams want to bowl first on behalf of pitch reports.