The 7th edition of the Australian Women’s t20 League season will include a total of 8 teams. The eight participating teams are,

These are the eight Indian cricketers who will be playing in the Australian Women’s T20 league in 2021.

The first match will be played on October 14th at North Sydney Oval between Sydney Sixers Women and Melbourne Stars Women.

Grand league will be available for every match, you can join the contest and win up to Rs. 2 Lakh. 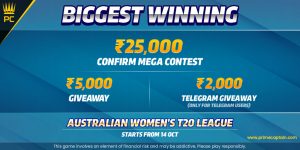 The leaderboard is worth 51 thousand, where the first prize will be 10 thousand. Join the Grand league with 11 teams. And win big on the leaderboard. The more teams you join in every match, the more your chances of being on TOP the Leaderboard. 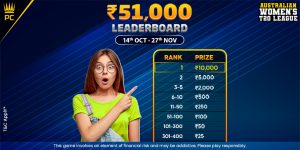 Prime Captain is going to provide a daily giveaway for all the matches, where you can join the contest completely free and win daily.

Prime Captain runs activities on social media, like guess the player and quiz, in which you can participate by answering the question asked, winners, will get amazon gift vouchers, or a free entry in the grand league where you can win up to Rs. 2 Lakh. and many more rewards.

Steps to avail the offer-